A downloadable game for Windows

The Catgeon is a fast-paced* dungeon crawler game. Playing as a magical cat, you can explore the endless depths of the dungeon and blast monsters with an array of destructive spells.

*The pace actually gets slower the deeper you go

In order to proceed onto the lower floors the player is faced with a small variety of quests.

A number of souls is spawned across the floor. In order to proceed all of them need to be found and collected.

Monsters appear on every floor and one of the tasks require a set number of them to be slain before a passage is opened.

As the player walks around and explores the dungeon a map is charted. In order to proceed the majority of the tiles need to be discovered.

There are three different kinds of attack spells and one defensive spell that the cat can use when battling monsters.

Magic Missile is the basic attack unlocked at the start. It requires no MP and creates a small projectile that shoots in a straight line towards the monster. If it misses it bounces off the walls and obstacles.

At level 5 the Magic Missile is upgraded and becomes a homing missile, making hitting monsters much easier.

Fireball is a more powerful attack that's unlocked at level 2. It consumes 20 MP on use and can be shot over obstacles. It creates a small explosion on hit.

At level 13 the fireball becomes stronger and faster, the explosion it creates grows as well.

Void is a powerful spell unlocked upon reaching level 8. It requires 60MP to use  and creates a large explosion that can damage multiple monsters at once.

At level 22 Void gets a lifesteal effect that makes it heal the player by a fraction of the damage dealt.

Shield is a defensive spell unlocked at level 18. It costs 80MP to use and gives the cat 30% armor, which protects it from losing HP while it's up. After being upgraded at level 26, the spell's potency goes up to 50%.

Very good documentation and report , each and every thing is explained  and give a clear concise view of what the game would be like without playing . From stats and exp to  damage dealt and how the shield works etc. Cute little dungeon crawler.I double checked but maybe its on my pc but the double click to run does not trigger most of the time.Single click on some tiles also does not work.

Things I would like but not necessary a boss fight at the end ,of a large turtleshell enemy. After all dungeon bosses give the best loot ;).

Overall good stuff . Thumbs up for sure.

Thank you for checking out the game and for your feedback! I'm glad to hear that you found the game and the documentation good. ♥

Now that you mention it, running has been a little wonky, and I have an idea why. I had put in some limiters to make the game register click inputs less frequently (otherwise it could look for paths every frame while the mouse is being held), but that also meant the double clicks wouldn't register if you double clicked too fast. I'm quite sure I had done something to prevent that, but it must have gotten lost in the later changes. 8);
It was an easy fix, so I updated the download! It should be much easier to move around now. I also made it so that clicking on an inaccessible tile makes you move near it rather than doing nothing, which might help too.

And I agree, boss fights would make a good addition! I was a little too ambitious in my plans for the boss fights so they ended up being pushed far down my priority list, but I might give it a go at some point!

hey... i have a tip... u should add a movement for the cat model when it does an attack

The model only came with the few animations I used and I did the cat's movement very early on (so I kind of got used to things being the way they are), but you are absolutely right, it would really benefit from some sort of movement/obvious state transition when it attacks.

I might try adding some simple animation myself if I find the time, thank you for the suggestion! 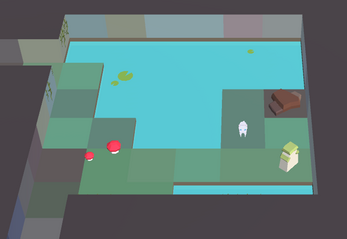 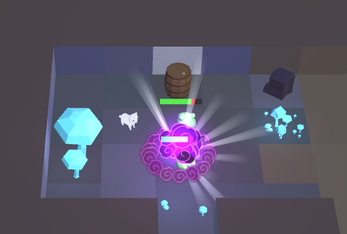 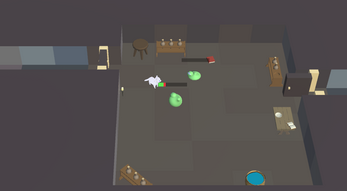 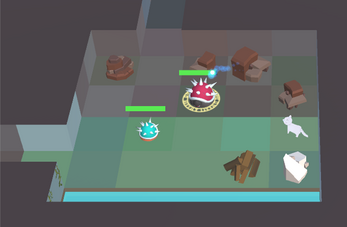 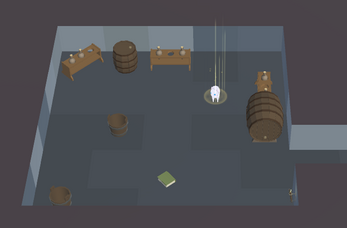 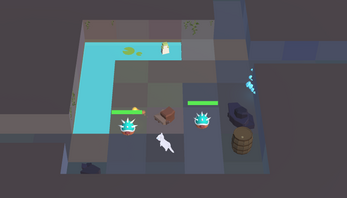